Bulbs that Brighten the Holidays: The History of Christmas Lights 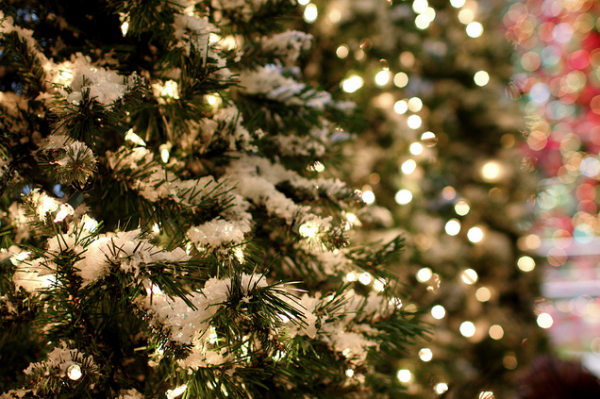 There’s one thing that never fails to brighten our houses and city streets in December: vibrant holiday lights. Who had the bright idea to mark the holidays with such flare?

Before light bulbs, burning candles were glued with melted wax onto Christmas trees for a few minutes each night. As you can imagine, this was a dangerous – albeit beautiful – endeavor!

Incandescent bulbs hit the market by 1880 (thank you Thomas Edison), but it wasn’t until two years later that people began stringing them on trees. In 1882, Edison’s employee and comrade Edward H. Johnson strung 80 red, white and blue light bulbs on a revolving Evergreen, and voilà! The holiday season aesthetic changed forever.

In 1900, most lights were too expensive for the average citizen. A single string of electric lights cost approximately $12 – the equivalent of $300 today! In 1903, General Electric became the first company to sell these pre-assembled Christmas light kits to the public.

In 1895, President Grover Cleveland requested that the White House tree be illuminated with multi-colored electric lights (some even credit him with sparking the public’s interest in indoor electric holiday lights).

So when did these bedazzlers become a national hit? In 1917, Albert Sadacca – a teenage boy whose family owned a novelty lighting company – had the idea to sell colored strands to the public. By the 1920s, he and his brothers started the National Outfit Manufacturers Association (NOMA), which became the largest Christmas light manufacturer until the 1960s.

Since the 1990s, LED bulbs have become the light of choice for Christmas trees – they use eight times less and shine just as bright. You can see them in action on the 100-foot Christmas tree that towers in New York City’s Rockefeller Center each year, with more than 30,000 bulbs lighting its branches.

Today, holiday lights come in all shapes and sizes, and can even light up in sync with music (check out this insane Christmas light show). Needless to say: we’ve come a long way from candles!