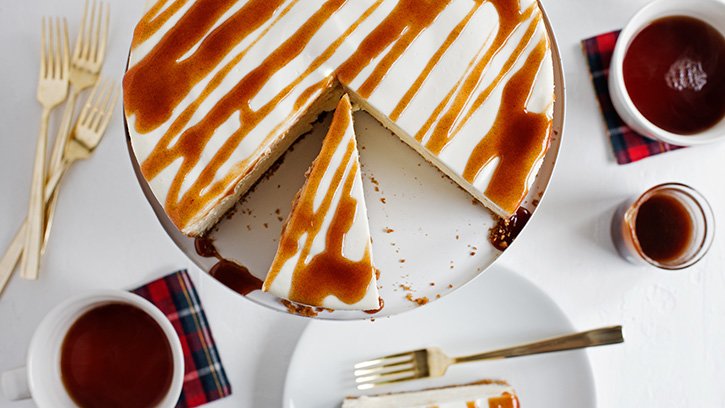 A creamy RumChata cheesecake with a Cinnamon Toast Crunch crust, spiked sour cream topping and a gooey cinnamon drizzle—what’s not to love?

When I make my own cheesecake I don’t try to compete with tradition, but instead I try something a little out-of-the-box, like this RumChata Cheesecake with Cinnamon Toast Crunch crust and a gooey cinnamon drizzle. I borrowed the sour cream topping from my in-laws, though. It’s my favorite part! But don’t worry—I added a little RumChata kick to that layer too.

First step is to gather your ingredients. Don’t be intimidated by the long ingredient list; the majority of them you probably already have on hand!

Preheat the oven to 350°F and make the crust first. To do this, combine the Cinnamon Toast Crunch cereal in a food processor until pieces are broken to fine crumbs. Then pulse in some melted butter, sugar and a dash of salt. Press the mixture into a 9-inch springform pan and bake for 10 minutes. Place the crust on a wire rack to cool, and lower the oven temperature to 325°F.

Once the crust has cooled, wrap the pan three times with heavy duty foil, wrapping the bottom and making sure it goes up the sides a few inches. (This will keep the crust from getting soggy!) Next, make the cheesecake batter. Beat cream cheese with an electric mixer on medium speed until smooth. Beat in some sugar, followed by 3 eggs, adding one at a time, and an egg yolk, beating well and scraping the bowl after each addition. With the mixer on low, beat in remaining cheesecake ingredients (RumChata, rum, sour cream, cinnamon and salt) until smooth.

Scrape the mixture into the pan and place the pan in a high-sided roasting pan. Place in the oven and create a water bath by carefully pouring a few cups of water into the roasting pan–enough to go up the sides of the cheesecake pan a bit, but not as high as the foil. Bake for 1 hour and 45 minutes or until the cheesecake is golden on top but still a little jiggly in the center. Turn off the oven, but leave the cheesecake in there for 1 more hour.

Once cooled, remove the foil from the pan and refrigerate for at least 4 hours before serving. Once the cake is chilled, whip up the gooey cinnamon drizzle. It’s super simple: melt the butter in a 1-quart saucepan, and then add the sugar, water, cinnamon and salt and cook on high medium-high heat until the sugar is melted and the mixture comes to a boil.

Boil the drizzle mixture for 1 minute, then remove it from the heat and let it cool for 10 minutes. Then drizzle it over the cheesecake!

This cheesecake may be a little more work than other desserts, but it’s perfect for the holidays when you want to try something special to present to your dinner guests! And trust me, it’s worth every wow you’ll receive at the Christmas party.