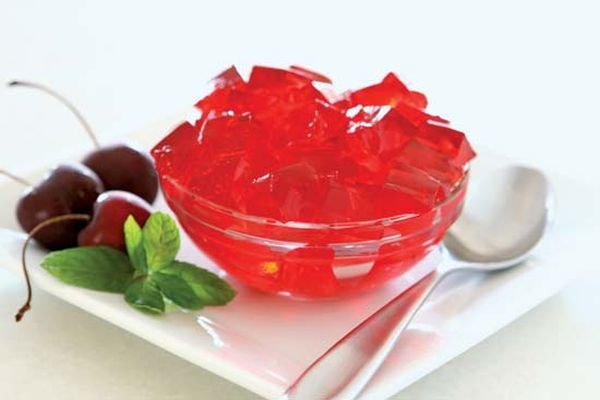 An odorless, tasteless and colorless thickening agent, which when dissolved in hot water and then cooled, forms a jelly. It’s useful for many purposes such as jelling molded desserts and salads, thickening cold soups and glazing chaud-froid preparations. Gelatin is pure protein derived from bones, cartilage, tendons and other connective tissue of animals. Much of the commercial gelatin today is a by-product of pig skin. Until the advent of commercial gelatin in the late 19th century, jelled dishes were not very popular because housewives had to make their own jelling agent by laboriously boiling calves’ feet or knuckles. Their only alternative was to use either the hard-to-obtain isinglass (gelatin from fish air bladders) or carrageen (a dried seaweed product). Granulated gelatin is the most common form of unsweetened commercial gelatin on the market. It’s packaged in boxes of ¼-ounce envelopes and is also available in bulk. Generally, one envelope of gelatin will jell two cups of liquid. It’s important to soak gelatin in cold liquid (whatever the recipe directs) for three to five minutes before dissolving it. This softens and swells the gelatin granules so they will dissolve smoothly when heated. Not as readily available as granulated gelatin is leaf (or sheet) gelatin, which comes in packages of paper-thin sheets. Four sheets of leaf gelatin equal one package of powdered gelatin. Leaf gelatin must be soaked longer than granulated gelatin and is therefore not as popular. This product is often called for in jelled European dessert recipes. It can be found in some gourmet and bakery supply shops. Sweetened gelatin dessert mix is also available in various artificial fruit flavors.